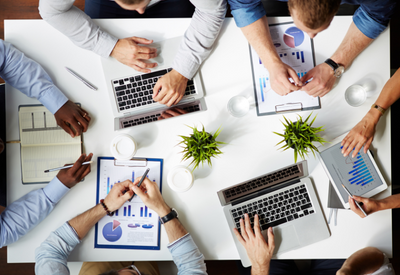 Last month, SESCO President & CEO John Palk provided us with a history of the country’s largest rep firm, along with a glimpse into its “dynamic” culture. In this follow-up article, we dive deeper into the candidate interview process and the company’s core values.

“I don’t want to give away all of our secrets, but I’m known to ask some interesting questions.” Palk confessed about the interview process. “I look for genuineness, teamwork, and how well someone is going to work with another individual or group,” he said.  And instead of starting the interview with a candidate’s strong points and success stories, Palk prefers to hear the opposite.

“I’m really interested in how people deal with difficulties,” he said. “Everybody in an interview wants to tell you about how great he/she is. I don’t want to hear about that; I want to hear about problems. Tell me about a time you solved a problem; how did that make you feel? In Sales, you have two options. You can run away from a problem – which there are plenty of people who do that – or you can run to a problem.”

Naturally Palk will discuss the details of SESCO’s culture and philosophy during the interview, but he also wants to dig a little deeper into the candidate as an individual.  “I just interviewed someone yesterday and said, ‘Listen, I’ve got one last question for you and it’s probably the most serious question I’m going to ask you all day, and it’s ‘What do you do for fun?’”

There are no right or wrong answers; there’s only insight. Are they playing video games or reading a book? Would they rather spend their free time with family or perhaps their leisure time is spent on the golf course or another activity.

“The answer tells us what this person values,” Palk stated. “And so, when we’re looking back at that dynamic culture we have, we want to understand what each individual values. I want our managers to understand what each individual values. We work hard, but we play hard. There are no slackers at SESCO. Someone’s response to one of those questions in the interview will tell me where they fall. I’m interested in hard work, but we have a culture that is embracing [of all types of leisure pursuits].”

Details about a candidate’s prior work experience are also important: Did they come up with their own ideas or projects to do, or did they only do as they were told? “’Tell me about a time you offered something new, unique, and different that was additive to the company,” Palk has asked candidates. “If they say they never had that opportunity, that tells me a lot,” he remarked. “Steve Jobs once said, ‘It doesn’t make sense to hire smart people and tell them what to do; we hire smart people so they can tell us what to do.’”

This is one reason “micromanagement” is an unwelcome word – and concept – at SESCO.  “If we have someone coming into our company, potentially, who has always been micromanaged, I already know how they take direction — but how do they take the freedom to think for themselves? When we add all of those things up, we might think, ‘Ok, this person can be additive, but if micromanagement is needed, that’s not a good fit for us,’” Palk explained. Conversely, candidates might be interested in joining SESCO because they felt stifled or micromanaged previously and are looking for a work environment where they could really spread their wings and feel valued.

When it comes to longevity, it’s hard to beat Bob Ransom’s record. One of SESCO’s first employees, he just acelebrated his 50th anniversary with the company last spring. Marshall Graham (who was hired as the receptionist in 1975) has been at SESCO for 46 years, 24 years of which was as President & CEO.

“We’ve got a total of five employees who have been here 40 years or more, and I think 15 or 16 who have been here 30 years and above,” Palk stated, adding, “The longevity is pretty fantastic.” And while you might discover that a present employee has had a family member work at SESCO in the past, nepotism has no place here.

“We have been very careful about hiring family members,” Palk remarked. “One of the things that we’ve put into writing going back to the 1970s, is that anyone with the right character, work ethic, knowledge education, and experience can rise to the top and  no relative in management will stand in your way. While we don’t have a lot of multi-generational workers, we do have folks who have retired and now their children work here.”

Palk said taking a hard stance on nepotism was important to the company’s growth. “Being an employee-owned company, we don’t want anyone to feel like they’re being held back because of a family member involved in the business. Do we have members of one family working at SESCO? For sure — but they cannot report to that person, and no one in key management has any relatives in the business.”

Just as SESCO is always poised for change, it remains watchful that its mission statement is aligned with the company’s culture. “Ultimately, we want to create the highest value for every client in every vertical that we participate in,” Palk stated. “It is all about value. You can have a mission statement, but if that mission statement does not align with the everyday culture, that’s a problem.  Our culture is so dynamic, our employees are so engaged and so intense and so fierce about – and protective of – our clients and our partners and the company that SESCO could be thought of as a verb.”

The fact that SESCO is an ESOP (Employee Stock Ownership Plan) means the company operates a little differently from most rep agencies.

“For us, right in the name ESOP is one of the defining characteristics of our culture, and that is ‘ownership.’ And as an ESOP, we work for each other,” Palk commented. “Our 375+ employee owners don’t work for me (as CEO) but I work for them.  All of our managers in the company share this philosophy. There’s very much a subservient level to our employees that many organizations do not necessarily have in that kind of boss-employee culture. So we’ve kind of turned that on its head. (As a culture, our advice is to hire and retain great people – and more importantly – trust them. ) Over the last three to four years, we’ve been deliberate to eliminate “micromanagement” as a descriptor used in our company.  And I would absolutely challenge any other organization to do that,” Palk affirmed. “Micromanagement, to employees, indicates a lack of trust, whether it’s intended or not. Hiring great employees, trusting them and giving them the freedom to make decisions, celebrating the wins and accepting and learning from the mistakes and being supportive in doing so is how we drive our culture forward. One of the ways we establish trust is hiring great people, retain them, trust them, and let them show you the way to evolve your company.”

Having operated his own agency in the past before joining SESCO, Palk knows this first-hand. “When you’ve been an agency owner and you’ve done every role in the business, one of things that’s hardest to do is let go and trust,” he confided. “However, engaging with employees, giving them career roadmaps, providing mentorship, being honest – and sometimes being vulnerable – is what it takes to create a dynamic supportive culture that ultimately drives your business forward.”

Founder of GM Lighting and Capri Lighting Sy Gerber passed away peacefully at home on November 13. He was 94 years old.

The Biden Administration launched several federal initiatives to reduce greenhouse gas emissions and improve the energy efficiency of buildings, with two specifically designed to encourage state and local governments to update their building energy codes. According to the National Association of Home Builders (NAHB), embedded in two recent pieces of massive legislation was some $1.2…

One year after being acquired, Universal Lighting Technologies and Douglas Lighting Controls combine entities under a new brand and corporate identity.

An English-speaking kindergarten in Seoul, Korea has selected SunLike lighting by Seoul Semiconductor to illuminate its classrooms for its daylight qualities as well as possible medical benefits.