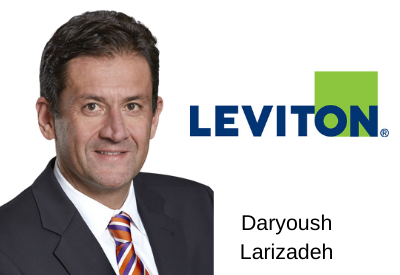 “Daryoush has been instrumental to Leviton’s success as President and COO and played a pivotal role in helping to navigate our employees and customers through a global pandemic,” Hendler stated. “His proven performance and leadership skills will continue to shape Leviton’s future as an innovative leader in the industry.” Hendler held the title of CEO since 2007 following the passing of Harold Leviton, whose father founded the company in 1906. Larizadeh is only the fourth CEO since the company’s founding 115 years ago.

“I am honored and humbled to take on the role of CEO at a company that’s been built on a long and successful history of innovation,” Larizadeh remarked. “Working closely alongside Don as President and COO has provided me with an unparalleled learning experience, and I am excited to build on the legacy that Don and our two previous CEOs have built during our 115 years of existence.”

The Leviton board remains unchanged with Hendler, Sokolow, Andrew Kriegman, and Lucy Guilherme continuing in their current responsibilities. As CEO, Daryoush Larizadeh will continue to report to the Leviton Board of Directors.

A California-based smart horticulture lighting manufacturer has been selected as the primary lighting partner by Certified Cultivators of Ohio.

Outdoor lighting professionals will enjoy a full roster of educational sessions and networking opportunities at the IES Street and Area Lighting Conference (SALC).

The Department of Energy has announced $127 million in funding to spur research and development projects in America’s small businesses — including solid state lighting.

Like all companies in the electronics industry, Casambi had been experiencing pandemic-related component shortages across the global supply chain. All of its operations and supply chain teams, in partnership with Casambi’s suppliers and subcontractors, have worked diligently in 2022 to identify and close these gaps. In doing so, the company has also assisted its ecosystem…