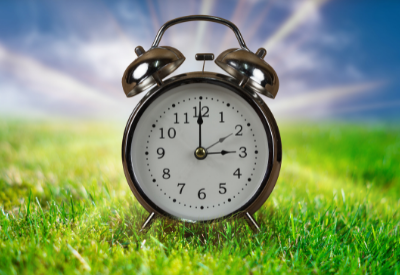 It’s not a rivalry as fierce as the New York Yankees vs. the Boston Red Sox, but the discussion of whether to abolish Daylight Saving Time (DST) in America can become a passionate debate.

On March 15, 2022, the U.S. Senate approved the Sunshine Protection Act, which ends the practice of changing the clocks twice a year – fall and spring – starting next November (2023). While the official vote was unanimous, not everyone is happy.

As an article on NPR.org reminded, this wasn’t the first time the government passed a law to make DST permanent. In the early 1970s, Congress passed a similar law in the belief that increased daylight would reduce energy consumption. When that didn’t prove true, the law was repealed in 1974. “Americans do not like changing their clocks, but they disliked even more going to work and school in the dark for months — the price the nation had to pay for more sunlight in winter evenings,” the article stated.

Other early advocates of DST were those involved in outdoor summer pastimes, such as sports and the barbecue industry. Not only has outdoor lighting proliferated over the decades, but so has the overall energy savings that can be achieved year-round just by replacing legacy light sources with LED. So, the argument for greater energy savings being realized by having naturally longer days, thereby creating less need for electricity, no longer holds up.

Over the past several years, there has been an emphasis on health and wellness in a broad range of areas – from hospitals and senior care facilities to offices and schools wanting to enhance comfort – and the key component is circadian rhythms.

Whether you’ve attended Lightfair, LEDucation, Strategies in Light, or an IES or similarly accredited educational webinar, you’ve noticed that lighting’s effect on circadian rhythms has become a hugely popular topic. Since DST affects our circadian rhythms, we thought it relevant to find out what experts think of the new DST law.

Daniel Frering, Education Program Director for the Light and Health Research Center at the Mount Sinai Icahn School of Medicine, responded, “It is clear there are benefits and drawbacks to all three options that we have available (switch to standard time or daylight-saving time for a full year, or leave things as they are). At the Light and Health Research Center, we do not advocate for any one position, but we do want to offer guidance to assist people who may be having trouble adjusting to the time changes. This guidance is based on the simple principle that people should be active in light, wind down activity in dim light in the evening, and should sleep in darkness. As one example on how to apply this principle, you could eat your breakfast on winter mornings, when it is dark outside, under bright electric light which would help to align your internal biological clock with the external clock time each day.” 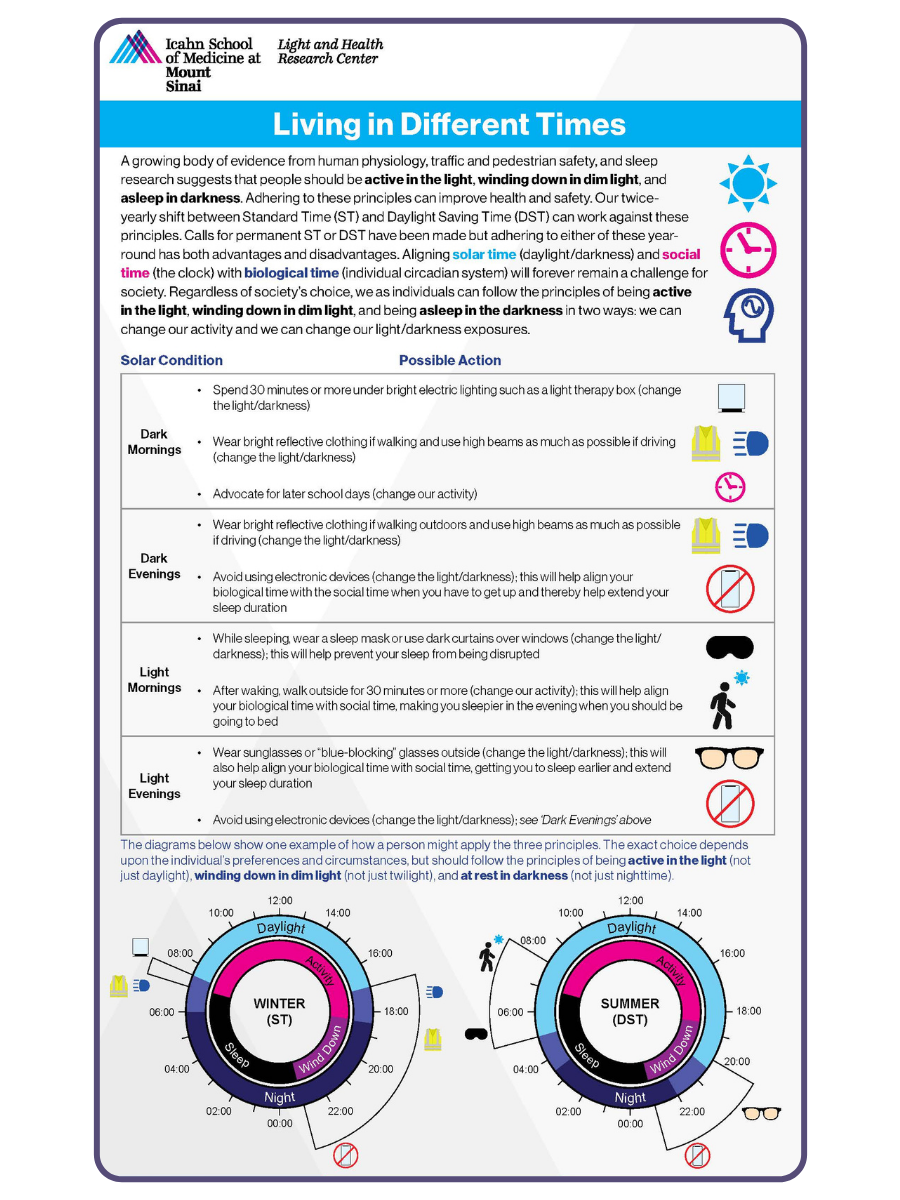 The American Academy of Sleep Medicine (AASM) – a professional society for the medical subspecialty of sleep medicine, which includes disorders of circadian rhythms – believes the U.S. should eliminate seasonal time changes in favor of a national, fixed, year-round time. According to the AASM, “current evidence best supports the adoption of year-round Standard Time, which aligns best with human circadian biology and provides distinct benefits for public health and safety.” (Read AASM’s full statement on the topic here)

Those opposed to DST are concerned by evidence that the body clock does not adjust easily to the seasonal time change even after several months. According to AASM, the worry is that “permanent DST could result in permanent phase delay, a condition that can also lead to a perpetual discrepancy between the innate biological clock and the extrinsic environmental clock, as well as chronic sleep loss due to early morning social demands that truncate the opportunity to sleep.”

There is concern that acute transition from standard time to DST could create public health and safety risks, including increased risk of adverse cardiovascular events, mood disorders, and motor vehicle crashes. The group added, “Although chronic effects of remaining in Daylight Saving Time year-round have not been well-studied, Daylight Saving Time is less aligned with human circadian biology — which, due to the impacts of the delayed natural light/dark cycle on human activity, could result in circadian misalignment, which has been associated in some studies with increased cardiovascular disease risk, metabolic syndrome, and other health risks. It is, therefore, the position of the American Academy of Sleep Medicine that these seasonal time changes should be abolished in favor of a fixed, national, year-round standard time.” 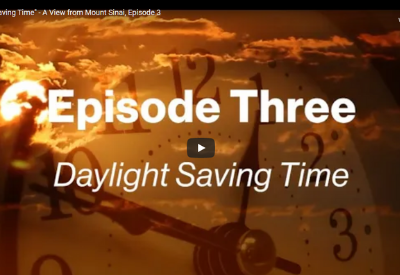 The Light and Health Research Center at the Mount Sinai Icahn School of Medicine has released an informative video presenting both sides. Have a look here

So with solid-state and LED lighting already doing more to reduce energy consumption globally – arguably more so than the practice of DST ever did – the rationale behind DST needs to change.

What are your thoughts? Are you pro DST year-round or a fan of doing so on a temporary seasonal basis?

A variety of hospitality events and special attractions are planned for the second annual ArchLIGHT Summit in Dallas.

Three female head of households in Massachusetts will add homeowner to their list of accomplishments, thanks to a partnership between Schneider Electric and Habitat for Humanity.

MaxLite’s Umesh Baheti details what makes the innovative c-Max™ product line stand out in the crowded field of controls and how it can be a game-changer beyond lighting. 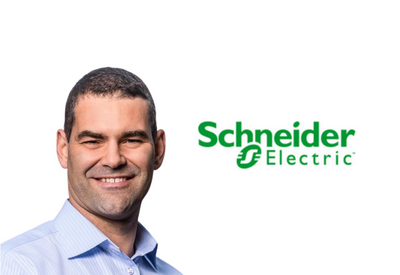