Most of the deployed lighting systems today are wired; however, wireless, especially Bluetooth Mesh systems, are catching up quickly for a number of reasons: Semiconductor companies are improving IoT products; new software makes working with them easier; and wireless lighting is gaining market share and is becoming customers’ preferred choice.

The primary difference lies in how wired and wireless lighting fixtures and controls communicate. In wired systems, they are connected, quite literally, with a wire. In wireless systems, lighting controls are powered by batteries and communicate with the luminaries through radio waves. 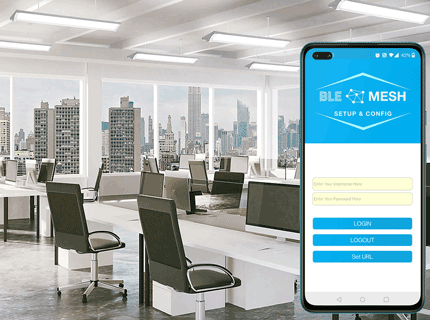 Another advantage of wireless lighting systems is the significantly lower cost of the installation and maintenance. They are also more flexible and scalable:

With this in mind, it makes sense to take a closer look at the wireless lighting options.

Wireless protocol is simply a set of rules that wireless devices use to communicate. There are three main protocols for smart lighting systems: Bluetooth Mesh, Zigbee, and Thread. Thread is limited to small networks and geared toward smart homes, not commercial lighting. For commercial lighting, Zigbee and Bluetooth Mesh are the two main protocols.

There are plenty of articles comparing Zigbee and Bluetooth Mesh, with competing opinions. In reality, Zigbee and Bluetooth Mesh are very similar from the user’s point of view. Both systems are power-efficient and in each case, the device is interconnected with other devices in an arrangement called “mesh topology.” Mesh topology allows for large networks and the long-distance transmission of messages between switches, sensors, and luminaries. Both have robust security measures built in.

Some differences between them that might be important for a specific project are:

We should note, however, that there are two significant advantages of Bluetooth Mesh over Zigbee:

Given these advantages, let’s review Bluetooth Mesh in more detail.

Bluetooth Mesh at a Glance

Bluetooth Mesh specifications were developed and released in 2017 by Bluetooth Special Interest Group (SIG). Although Bluetooth Mesh can be used for any type of IoT devices and networks, it was designed with commercial lighting applications in mind.

In addition to basic operations – such as adding and removing devices from the network, grouping devices together, and controlling groups’ interaction – Bluetooth Mesh specifications include multiple standard models. Each model defines the communication rules for specific functionality, for example, turning the device on or off. Many of these models are designed specifically for lighting applications. Their features include light dimming, light color (temperature control, light hue, the dimming curve in response to a signal from a sensor or a switch), lighting scenes, schedules, and the way to report energy consumption, to name a few. 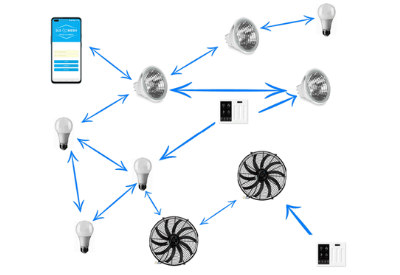 A smart lighting network might consist of luminaries, sensors, switches, and, optionally, a gateway. In a mesh, each device is connected to multiple other devices. Therefore, each of them can send and relay messages to its neighbors. This arrangement allows messages to travel over a long distance, far exceeding a normal Bluetooth communication range of just tens of meters. This makes mesh topology a perfect choice for IoT networks. It requires just one gateway for the entire network. In a Bluetooth Mesh network, a smartphone or a computer can be used as a gateway, and you can access and control all network devices with a smartphone from a single point.

Typical Bluetooth Mesh lighting network configuration includes adding new devices to the network (provisioning) and grouping the devices to define which switches and/or sensors control which group of lights. The provisioning and grouping are usually done on-site using an app. The groups’ arrangement can be adjusted at any time after the initial installation to address changing needs of the building tenants.

After provisioning and grouping are done, the installers can optionally set and change various configuration parameters for the luminaries and sensors. The exact parameters depend on the specific devices and may include maximum and minimum dimming level, the default dimming level, sensor sensitivity, timing and light levels for the lights dimming up and down when a change in occupancy is detected, a maximum light intensity (in lux or footcandles), and more. Other options include setting the scenes (lighting scenarios that can be recalled with the switch or an app) and schedules. All parameters set during the installation can be adjusted at any time as needed.

Special mechanisms are built-in to ensure network security and reliable communication between Bluetooth Mesh network devices. All network messages have several levels of encryption. There are multiple options to tune Bluetooth Mesh network messaging for better performance. A network designer can control which network nodes can relay messages, how many hops a message can make before the network drops it, and how many times a single node can re-transmit the same message.

In Bluetooth Mesh, you can combine groups of devices with different functionality in one network. Each network message is directed to the devices with the specific functionality (in Bluetooth Mesh, this is called an application). Other devices can relay the message without processing it. This capability allows Bluetooth Mesh networks to have better area coverage and a more reliable transmission of the network messages. In a smart building, for example, HVAC equipment and thermostats can serve as transmitters of the lighting messages, but they will only react to HVAC system-related messages.

NexGen Power Systems’ new Helios LED Power Modules made an impression on our editors at LightFair from an OEM perspective.