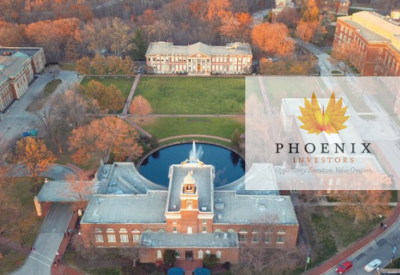 Nela Park has become nearly synonymous with GE Lighting, a Savant company, headquartered there since its inception. GE Lighting – which was acquired by Savant Systems, Inc. in July 2020 – has reportedly signed a long-term lease and will remain on the campus. GE Lighting also announced that two of its Ohio manufacturing plants – one in Bucyrus and one Logan – will close.

With this acquisition, Phoenix will add more than 1,000,000 square feet to its growing portfolio. “The future of Nela will be in good hands and positioned to benefit local communities that rely on job creation, income tax dollars, and consumer spending to thrive,” said Kathy Sterio, President of GE Lighting.

“This is great news for our business and the future of Nela Park, as well as East Cleveland and other surrounding cities. Phoenix has a track record of success reinvigorating and investing in commercial real estate to attract new tenants and will bring that same approach to historic Nela Park,” she added.

In September 2021, Phoenix announced the acquisition of The Huron Campus in Endicott, New York, the birthplace of IBM. The acquisition of Nela Park would add another historic property to Phoenix’s portfolio.

“We’re excited at the prospect of expanding our footprint in Ohio with Nela Park,” said Frank Crivello, Founder & Chairman of Phoenix Investors. “Revitalization is one of our core values; we plan to both honor the Park’s history and embrace its future with thoughtful renovations while attracting high-quality tenants to the area.”

Delta Light Group North America has made three key appointments to its team and promoted two others.

Imagine a self-contained office space. One that is smart enough to disinfect itself ahead of anyone using it so that it is virus and bacteria-free. Sounds too good to be true? Well, it actually exists, and it could be coming to an office near you.

With its 130% growth rate over a three-year period, British Columbia-based Kuzco Lighting has made the coveted Globe and Mail’s 2022 list of Canada’s Top 500 Growing Companies.