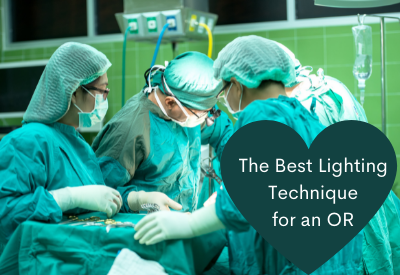 Today’s operating rooms (ORs) are integrating a variety of technological advances that require proper lighting to be fully utilized. This paper describes these challenges, reviews the historical solutions, and provides insight into how LED technology can more effectively reduce eyestrain, improve visual acuity, and create an operating advantage for the OR team.

Advances in medicine have come from a variety of sources, ranging from basic research to public policy. Such research is generally designed to provide better insight into the processes that are occurring at a molecular level, so that targeted interventions or therapies can, in turn, be developed. At a slightly higher level, the entire field of medical imaging (CT, fluoroscopy, MRI, nuclear medicine, etc.) was developed out of a need to see the structure and/or metabolic processes occurring within the body, diagnose the underlying condition, and provide accurate treatments while reducing the need for invasive surgeries.

Historically, imaging was used in a clinical setting pre-operatively to target the procedure, and post-operatively to assess its effectiveness. In recent years, this capability has been brought directly into the OR allowing physicians to perform more complex procedures by providing them with real-time, or near real-time, feedback on the effectiveness of their actions. This creates a single episode of care model where both the imaging and the intervention can be combined in the same setting. Another important advancement in the field of surgery was the development of minimally invasive or endoscopic techniques, which have greatly reduced procedure cost, infection rates, and recovery time, while improving patient outcomes.

Although substantially different in complexity and cost, the equipment used in both of these environments consists of a range of monitors/flat panel displays positioned at various distances around the physician and the rest of the OR staff. These monitors allow for the selection of individual angles for display and viewing by the entire OR team. In many cases, they are suspended directly within the surgical field on the same booms as the surgical lights. In other cases, they may be placed outside the surgical field (e.g. on the wall opposite where the physician normally stands) to eliminate visual clutter.

The use of monitors has been expanded for non-imaging purposes to display vital sign information, charts, room controls, etc. Virtually every type of OR incorporates monitors to some degree. Therefore, ensuring proper placement and illumination throughout the room has become a topic of interest to all.

Normally, the OR is brightly lit to enhance task performance, however, this can have the unintended side effect of making it very difficult for the OR team to see the monitors due to reflections, glare, and poor contrast.

The earliest response to this dilemma was to simply turn off the overhead lights to create an effect similar to that in a movie theater. While this did improve the OR team’s ability to view the monitors, it also created an entirely new set of challenges related to performing simple tasks previously taken for granted, such as moving about the room, viewing/writing information, and handling equipment.

An alternative to turning the lights off was to dim them to levels that provided enough illumination for secondary tasks while improving contrast between the room and the monitors critical to the display of information. Unfortunately, in the past, most ORs had switches, but rarely had dimmers due to limitations of fluorescent ballasts. Therefore, this option was ruled out, and yet another option was considered: the fixture was rewired in such a way that only 10% of the lamps throughout the room were utilized. Furthermore, a green filter was placed over these lamps to not only reduce their output, but also to maximize the photopic response of the light in the environment, creating better contrast with the monitors while providing sufficient light throughout the entire OR. This adjusted the overall light levels to approximately 86 lux — roughly equivalent to twilight.

What is the “Right” Amount of Light for the OR?

To understand the reasoning behind this choice and why it was so effective, one must understand how the eye works under different light conditions. In short, the lens of the eye focuses light onto the retina, where photosensitive pigment on the rods and cones convert it into electrical impulses that are transmitted to the brain via the optic nerve. 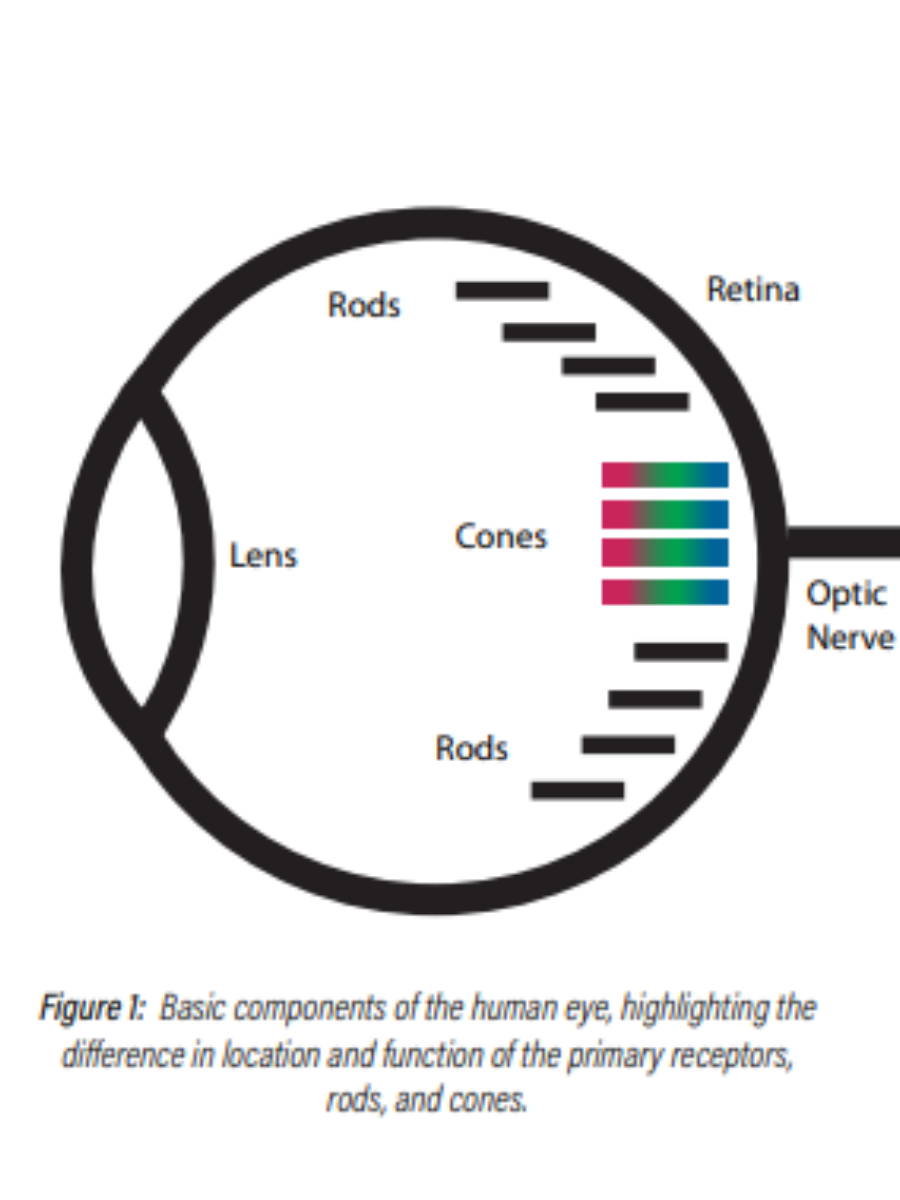 Under normal daylight or “bright” light conditions (> 100 lux), light reception is determined primarily by receptors called cones, which are sensitive to both the intensity and color of light. This level of illumination is referred to as the “photopic” region. The visual system is optimized for contrast in this region and uses any “excess” light to create sharp, fine detail in images.

At night (< 0.1 lux), the visual system employs a different set of photoreceptors, known as rods, to detect light. Rods are very sensitive to the intensity of light, but do not provide color information. Their sensitivity, however, is wavelength-dependent. This level of illumination is referred to as the “scotopic” region. The visual system is optimized for overall light-level detection in this region, and trades off image detail for sensitivity. This increased sensitivity causes the rods to become overstimulated and rendered temporarily inoperable (i.e. blinded) at photopic light levels (~100 lux) due to depletion of the corresponding photopigment. After this stimulus is removed (e.g. turning the lights off in a room), the photopigment rebuilds and the scotopic system returns to normal. This explains why there is a period of visual adjustment in these situations.

Light levels between these two points are processed using a combination of both systems. This is referred to as the “mesopic” region. Visual performance at these light levels is dominated by whether objects lie in the line of sight or in the peripheral field of vision. Objects that lie in the line of sight will be viewed by the cones and will thus have relatively good visual acuity and color vision. Conversely, those objects in the peripheral vision will be viewed by the rods and will, therefore, have relatively poor visual acuity, loss of color vision, and a slight blue shift in spectral sensitivity.

Armed with this information, one can see that the choice of 86 lux places the illumination near the top end of the Mesopic region, thereby preserving the use of both the rod and cone systems. This is important, as it allows one to see both within the surgical field and near the edges of the room where there may be more or less illumination, depending on how the overhead lights are arranged.

This decision also highlights the fact that the choice of illumination level is a balancing act of sorts. On one hand, having the light level as low as possible (i.e. off) eliminates glare due to reflections from the monitor face, and improves contrast. On the other hand, having a bright light makes it easy to perform tasks such as reading labels, choosing instruments, and moving about the room. Thus, the optimal light level is one that balances these two considerations for the OR team. This can be best achieved by using lighting with some type of dimming, so that the illumination level can drop into the Mesopic region, if desired.

Why Green? (And Which Green is Best?)

Having established an illuminance level, one must also consider the effect that the illumination’s hue has upon the OR team’s visual capabilities. Early “night vision” systems used red light, as this significantly reduced the impairment to the scotopic system, thereby allowing the user to see and function better with or without active light. This is due to the relatively low sensitivity of the rods to red light, as highlighted in Figure 3 below. 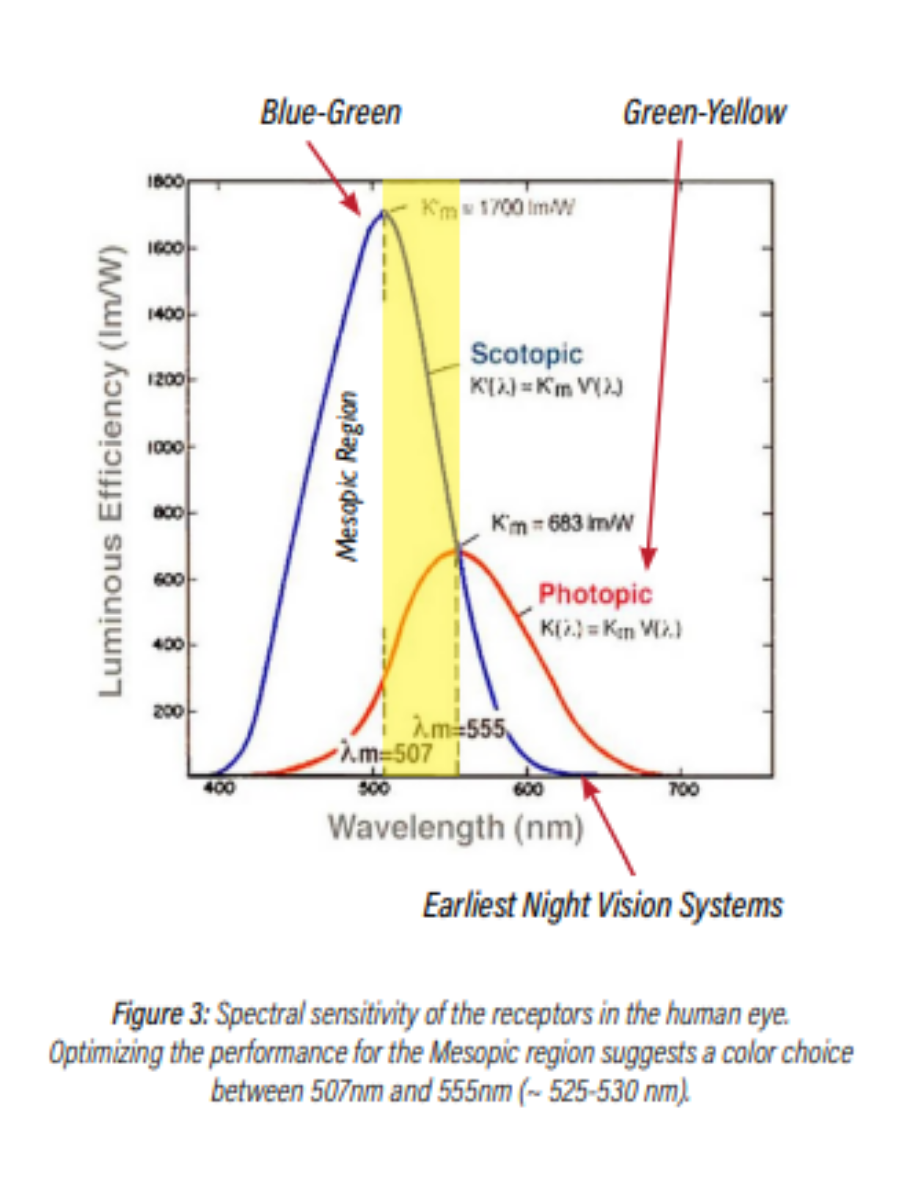 In a surgical environment, however, the choice of red is suboptimal, as it impairs visualization of red objects (tissues, veins, wounds, etc.), creates greater eyestrain (both physical and psychological), and consumes more electrical power, as compared to shorter wavelengths. Outside of the medical environment, these same night vision systems were used in aviation with some success, however, the users were challenged to read the magenta markings on their maps due to poor contrast under such illumination. Replacing the red with green provided a solution to these issues, as the photopic response peaks at 555nm, thereby maximizing the optical benefit of those photons, while also creating contrast

with the monitor/displays in the room.

Finally, choosing the “right” color of green will help maximize the contrast when viewing a monitor. This can be explained with the help of the 1931 CIE diagram shown in Figure 4. 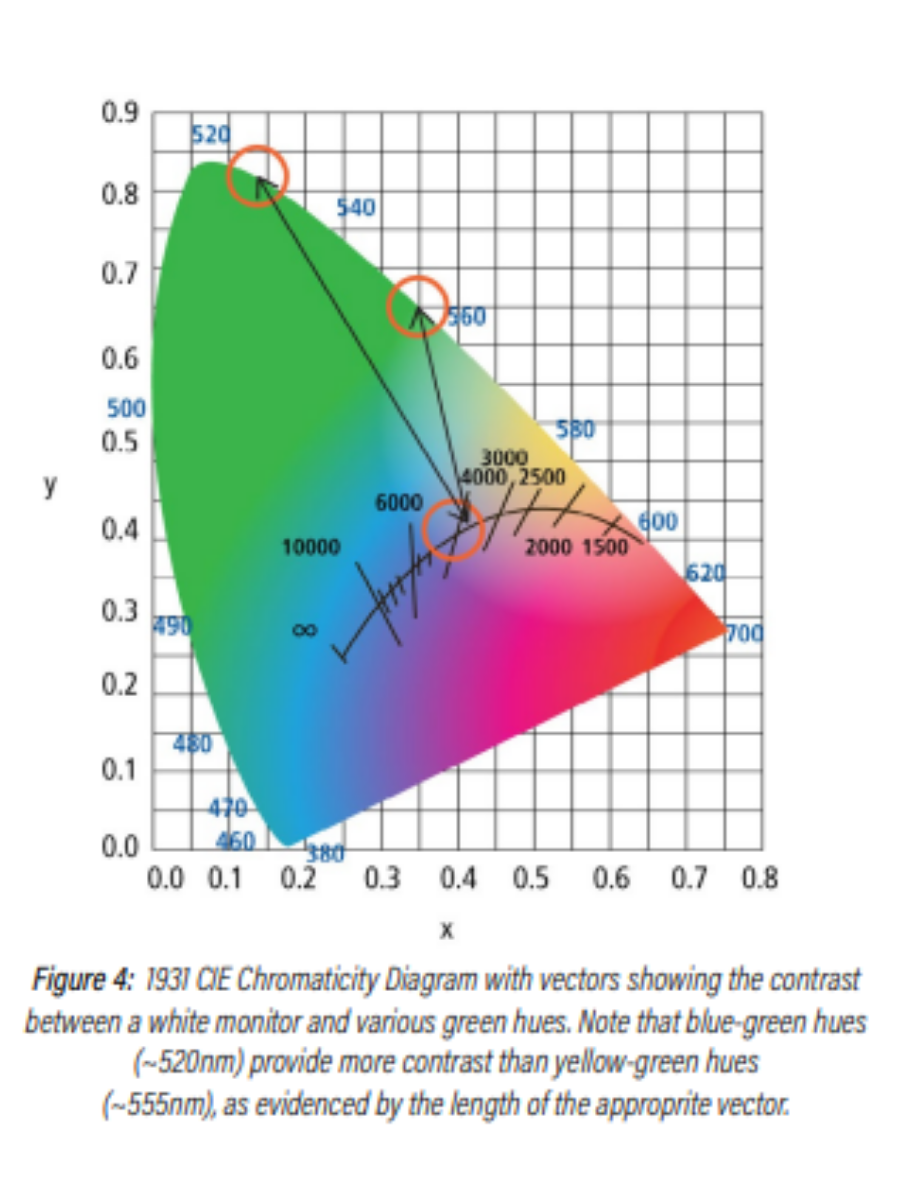 Here, the length of the line between the Planckian locus (white light) and a particular hue of green demonstrates the relative contrast between them. Thus, one can see that blue-green hues (~520nm) provide greater contrast than green-yellow hues (~555nm).

Manufacturers use four methods to produce green light in the OR environment:

While each of these options have their own advantages, the use of green LED technology provides the user with an application optimized spectrum that has no transmission loss due to filters, a more saturated green hue, and superior maintenance benefits. 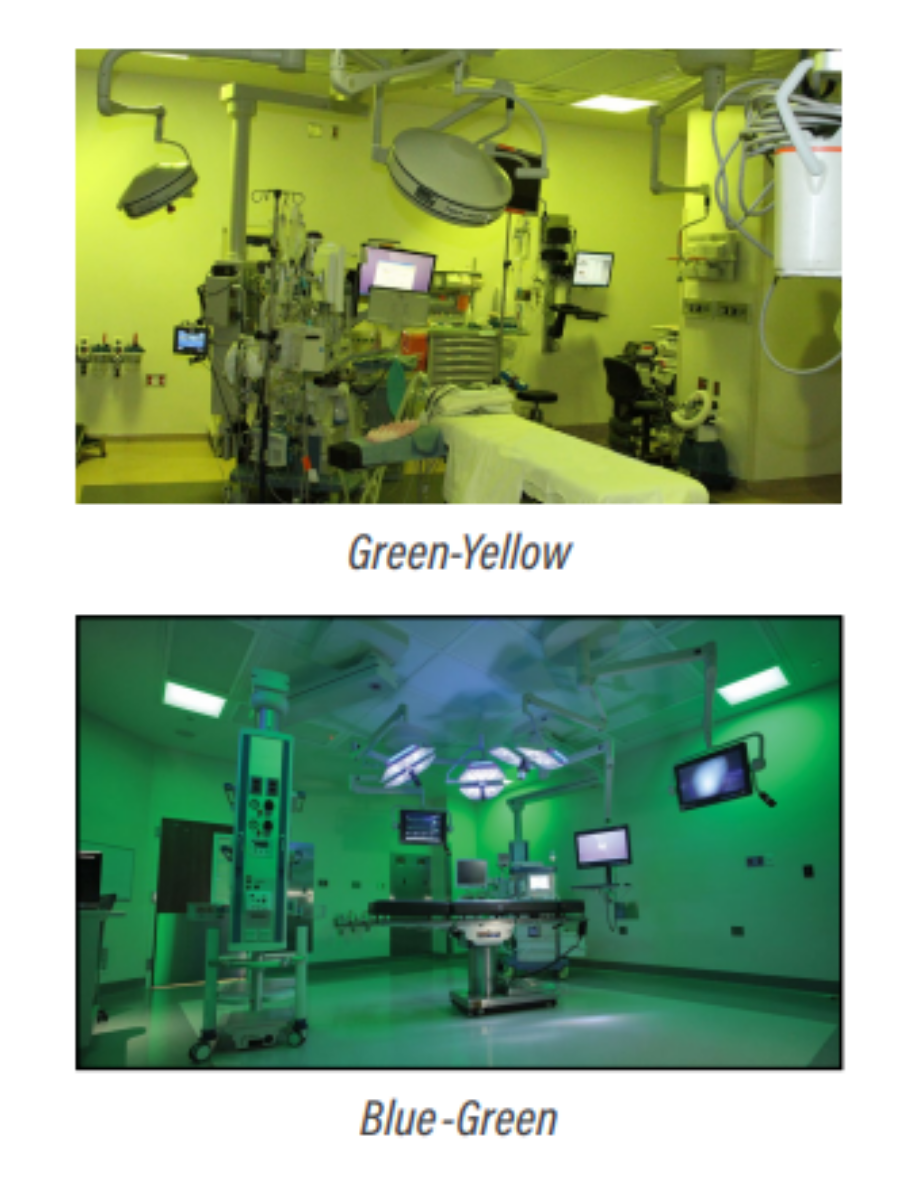 Bringing It All Together

The key learning objectives of this paper can be summarized as follows:

1. All types of operating rooms are incorporating various displays and monitors that can benefit from low level ambient illumination

2. This level of ambient illumination should be adjustable across a range low enough to provide good contrast with the displays and monitors in the room, and yet high enough to allow the OR team to:

a. Experience high visual acuity within the surgical field

b. View monitors, perform tasks, and move about the room as required

c. Shift their view between different levels of illumination (monitors, inside the surgical field,

outside the surgical field) with minimal impact

3. The hue of this illumination should be greenish-blue (530nm) to:

b. Maximize contrast with monitors in the room

c. Minimize impact to the OR team’s low-light vision

d. Provide the ability to distinguish between different shades of red

4. Green LEDs provide a more efficient, reliable method of producing light that meets these requirements, as compared to fluorescent tubes and/or white LEDs.

The lighting fixtures in this case study are from Kenall Manufacturing, a Legrand company. Founded in Chicago in 1963, Kenall has built a reputation for durable lighting solutions of superior quality and exceptional value for the healthcare, cleanroom/containment, food processing, transportation, high abuse, and correctional lighting markets. Kenall luminaires are designed and manufactured in Kenosha, Wisc., and comply with the Buy American Act (manufactured in the U.S. with more than 50% of the component cost of U.S. origin).

MaxLite’s Umesh Baheti details what makes the innovative c-Max™ product line stand out in the crowded field of controls and how it can be a game-changer beyond lighting.

The sustainability plans and practices of major retailers around the world are revealed in a new book co-authored by veteran lighting and retail journalist Vilma Barr and store designer Ken Nisch.