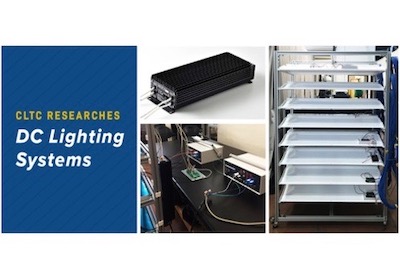 By Andrew Harper and Keith Graeber

DC lighting systems are categorized into two types: Power-over-Ethernet (PoE) and Low Voltage Direct Current (LVDC). The selected DC systems are representative of the commercially available DC lighting system market segment identified during the market assessment, with PoE systems being the most common. CLTC selected two PoE systems and one LVDC system to evaluate as compared to one traditional AC system (Table 1). The two selected PoE systems use the same 480-W, eight-channel power switch. CLTC selected the LVDC and AC systems to fit approximately the same area served by the PoE systems. The LVDC system selection was also influenced by manufacturer responsiveness during the market assessment.

The system architecture varied across the selected systems. All three DC lighting systems consisted of a power supply and luminaires. Additionally, DC Manufacturer 3’s system required a wall switch dimmer for dimming, and both of the PoE systems (DC Manufacturer 2 and 3) required additional control peripherals (gateway computer and router) for commissioning and control. The baseline AC system consisted of eight luminaires with dimmable drivers. The luminaires used with the PoE and AC systems were 2-ft-by-4-ft recessed LED troffers. The LVDC system utilized 2-ft-by-2-ft surface-mounted luminaires recommended by DC Manufacturer 1. These luminaires were chosen to maximize the load on the LVDC power supply while remaining within the study budget.

CLTC collected measurements to compare the electrical performance of the three DC systems to the baseline AC system. Each of the DC lighting systems evaluated were marketed as serving a “Floor/Large Space.” CLTC used computer modeling to estimate this as 1,750 sq ft or less in floor area based on the size of the DC power supply and wattage of typical luminaires. The tested DC lighting systems provided either 8 or 9 ports (8 for PoE, 9 for LVDC) with a total power output ranging from 226 to 480 watts. CLTC analyzed the electrical performance of each system at the space level only and did not consider generation or transmission losses occurring upstream of the space itself.

Each system’s overall electrical efficiency was calculated as the total output power of the system divided by the input power to the system. Ideal efficiency is 100%, meaning no power loss occurs anywhere in the system. In practice, power loss occurs at many points within a lighting system. For DC systems, power losses consist of 1) conversion losses (both AC-to-DC and DC-to-DC), 2) peripheral device losses (gateway computers, routers, etc.) and 3) line losses. For AC systems, power loss occurs at the LED driver (AC-to-DC conversion) and at peripherals, when included. Line losses for AC lighting systems are typically very small. For this evaluation, no AC system peripherals were required and line losses were assumed to be zero.

Measurements were taken with laboratory-grade meters before and after each power conversion point in the system, and at the beginning and the end of each conductor or cable carrying power. The electrical measurements for this study were taken under what could be considered worst-case scenarios for the DC lighting systems. Specifically, measurements were taken using the longest recommended cable runs from the power supply (or power switch) to the luminaires. Subsequently, CLTC used computer modelling to calculate cable lengths that are more realistic and the system efficiencies were recalculated accordingly. For each system, these losses were totaled and used to calculate the total system efficiency (Equation 1). 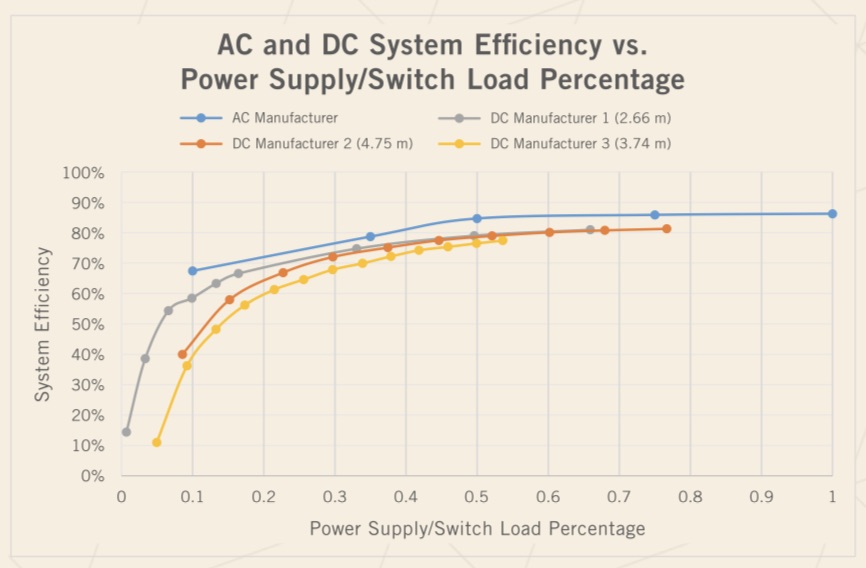 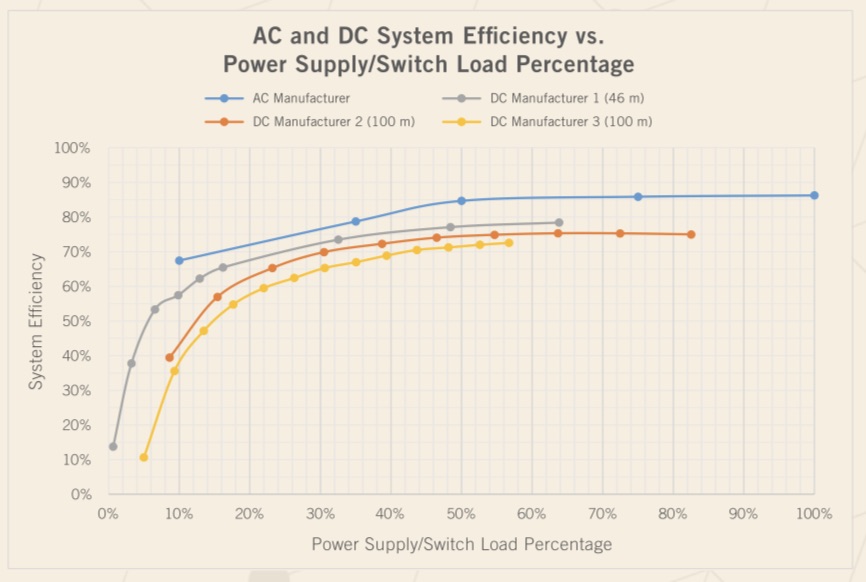 CLTC analyzed DC systems up to 480 Watts of output power for this study, and the results show that at this power capacity the efficiency gains from the larger-scale conversion of AC-to-DC are less than the power losses due to additional DC-to-DC conversions, line losses and the load of the peripheral control equipment. In fact, AC-to-DC conversion losses were the highest source of power loss in each DC system by almost an order of magnitude with respect to the other sources of power loss (Table 2). It is possible that a DC lighting system with a centralized power supply greater than 480 watts could realize enough energy savings from its larger-scale AC-to-DC conversion to offset the losses from the additional DC-to-DC conversion and the power of the peripheral control equipment. Additional testing is needed to evaluate this product category.

DC lighting systems are well suited for use in emerging DC power transmission strategies, or DC microgrids. DC microgrids are capable of providing power directly from renewable resources to the appliance via an energy storage system, eliminating any AC-to-DC conversion losses. These DC microgrid systems do introduce losses from electrical inefficiencies in charging and discharging the electro-chemical storage devices. However, these energy storage systems provide grid resiliency and will continue to power the DC microgrid in the event of a power grid outage or lack of adequate power from renewables. Future research will determine if the use of DC lighting systems in a DC microgrid can offer significant energy savings over traditional AC lighting systems.

To learn more about this study, read the full report published by the Emerging Technologies Coordinating Council: www.etcc-ca.com/reports/laboratory-evaluation-dc-lighting-systems

This article originally appeared in LD+A August 2020 issue, published by the IES. It is reprinted here with the permission of UCDavis. 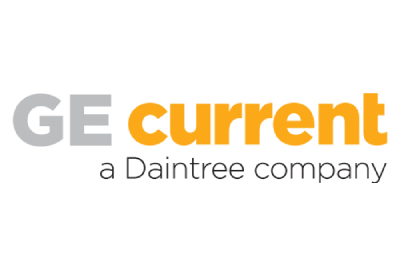 GE Current, a Daintree company has launched a newly redesigned website at www.gecurrent.com  and www.led.com.

The sustainability plans and practices of major retailers around the world are revealed in a new book co-authored by veteran lighting and retail journalist Vilma Barr and store designer Ken Nisch.

There are many advantages to specifying American-made product, however the recent pandemic has brought some compelling benefits to the forefront.