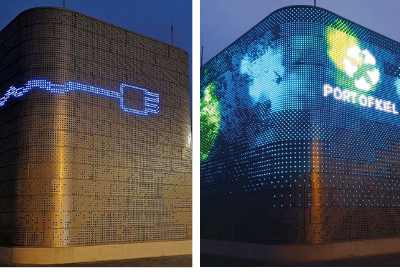 The façade of the on-shore power plant at the Ostseekai cruise terminal, part of the Port of Kiel in Germany, was awarded the German Lighting Design Prize 2021 in the “Projects with an Artistic Background” category. One of top cruise ports in Germany, Kiel is located on the Baltic Sea coast.

The on-shore power system was designed by BSP Architekten BDA, an architectural firm based in Kiel. The lighting design of the modern LED façade was created by team licht from Hamburg, whose managing director Hauke Giesecke was on-hand to accept the award, stating, “The combination of façade and lighting design deliberately visualizes the function of the on-shore power system, the climate-neutral supply of electricity to ships while they are in port. The lighting design gives the physical processes a unique expression. My thanks go to the builder and the architects for the joint realization of this outstanding project.”

Dr. Dirk Claus, builder of the on-shore power facility and Managing Director at the Port of Kiel, added, “With the façade, a highlight has been created in Kiel in the very literal sense of the word. We congratulate our partners on this brilliant achievement. From next year onwards, we will be able to cover 60% of the energy requirements of the ships calling at the port in an emission-free way with the shore power systems. Kiel is thus taking on a pioneering role.”

Doris Grondke, City Councillor for Urban Development, Building and Environment of the State Capital City of Kiel, said, “Due to its outstanding location, at the interface of the city center and the waterside on the Kiellinie, the urban planning requirements for the on-shore power facility inaugurated in June 2021, were high from the very beginning. The positioning of the building and the formulation of the cubature in interaction with the façade and lighting design succeed in setting a clear architectural accent at this location.”

The lighting is just as noteworthy as the energy savings. As architect Jan O. Schulz of BSP Architekten BDA, explained, “This façade is unique in its kind. Even during the day, its dynamically structured perforations and reflectors give it a character all its own, changing with the light like a water surface. But as soon as the more than 12,000 LEDs hidden in the façade are switched on in the dark, there are hardly any limits to diversity and creativity. Another, completely new, and controllable level of design emerges.” The illuminated presentation is continuously changing with different lighting effects to keep the façade interesting for viewers. In addition, the depiction of writing and image has an explanatory nature that offers an informative added value.

The Port of Kiel will operate in a climate-neutral manner from 2030 onward. To achieve this goal, a three-step plan has been developed. In the first step, 60% of the energy requirements of the ferries and cruise ships in the port will be covered emission-free by the on-shore power systems starting in 2022. Beginning in 2025, this figure will rise to 80 to 90% before climate neutrality is achieved in 2030.

According to a new study by Accenture, corporate commitments to net-zero accelerated over the last two years, with almost one-third (30%) of Europe’s largest listed companies pledging to reach net-zero by 2050.

No one enjoys unsolicited advice on what your company might be doing wrong — unless you’re running a Rep Council and actually asking for that feedback.