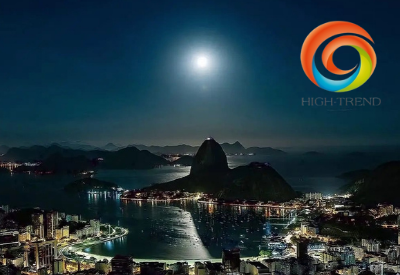 High-Trend International (HTI) of Puerto Rico, along with its Brazilian joint venture High Trend Brasil (HTB), have successfully closed USD $165.5 million of long-term financing to fund the completion of its Rio de Janeiro Smart City & Public Lighting Project. The funding was executed through a novel financing structure with debentures being issued locally by the Brazilian project company, Smart Luz, and an offshore issuer selling 144a/Reg S Notes.The Notes are guaranteed by the United States International Development Finance Corporation (DFC) and received a global scale rating AA+ (Fitch) and Aa1 (Moody’s). Goldman Sachs & Co. LLC served as global coordinator, bookrunner, and structuring agent of the notes. The Notes were deemed sustainable due to the project’s positive impacts on both environmental and social issues.

The issuance of the notes will help to finance the investments for the implementation of the largest integrated smart city project in Latin America, which includes the modernization of the more than 450,000 street lights with LED technology, the deployment of an Internet of Things (IoT) network that will remotely connect LED luminaires and more than 25,000 additional points, including cameras, wireless sensors, and free wifi access points which will all be connected and managed in a new Operational Control Center.

After the investment’s completion, Smart Luz projects a minimum reduction of 65% in electricity consumption, which is equivalent to a reduction in the emission of CO2 of at least 100,000 t/year. In addition, the project will create the basic platform for the development of future Smart City solutions which will be crucial for Rio de Janeiro to meet its ongoing sustainability objectives.

Juan Revilla CEO of HTI said of the project, “This Rio Smart City and Public Lighting Project will be a model for future sustainable project financings and serve as a strong example that largescale ESG-focused infrastructure projects can and will be successful.”

The DFC has highlighted this project as an example of climate friendly infrastructure as world leaders meet in Glasgow for COP26 to discuss climate issues.

The project’s impact on the citizens of Rio de Janeiro extends beyond environmental benefits to include increased safety from enhanced and reliable lighting, the democratization of internet access through free wifi access points, and preemptive flood detection through sensors and cameras.

“The ability to carry out a project with so many positive touchpoints for a community is rare,” added Jeff Carmichael, President of HTI. “The fact that High-Trend, our partners and the entire financing team will be able to do so for a community as large and complex as the city of Rio de Janeiro is truly amazing.”

If you’ve been missing the full-scale booths and in-depth product presentations that have characterized LightFair for decades, you won’t want to miss this year’s edition.

The NAILD and the LCA have collaborated on a new podcast seeking to raise awareness and expertise in lighting controls.