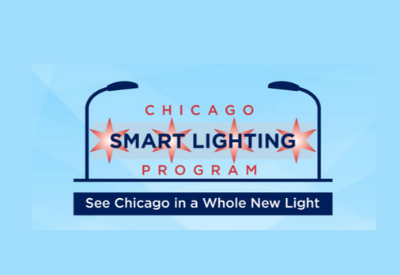 Chicago Mayor Lori E. Lightfoot announced the city has substantially completed the Chicago Smart Lighting Program (CSLP), a massive streetlight modernization project that has improved the quality of nighttime visibility throughout the city and is projected to save taxpayers $100 million in electricity costs over the next 10 years. City officials cut the ribbon for the project, primarily executed by the Chicago Department of Transportation (CDOT), at the Lyon’s View Manufacturing plant in K-Town on the West Side, where more than half the lights were assembled by Chicago residents.

“Our smart lighting program will shine a clearer and crisper light on our streets and sidewalks to allow pedestrians, bicyclists, and drivers to see other people and objects,” said Mayor Lightfoot. “Aside from significantly enhancing public safety, this program has also created jobs for some of our most vulnerable residents, is helping us achieve our climate goal of reducing our carbon footprint, and will deliver major, long-term savings for the city.”

The modernization project involves converting more than 280,000 outdated, hazy orange High-Pressure Sodium (HPS) streetlights – about 85 percent of the city’s streetlights – to high-efficiency LED lights, which use less than half the energy of the HPS lights and can last for twice as long.

The project also creates one of the largest and most reliable smart technology infrastructure systems in the country and establishes a national model for other cities as they update their streetlights. The new Smart Lighting Management System (LMS) was created in collaboration with the City’s Department of Assets, Information, and Services (AIS) and relies on wireless nodes attached to each fixture. The nodes are part of a network that detects a streetlight outage, automatically creates a repair ticket, and assigns repair crews to respond to the location.

“Creation of the lighting management system puts us in the forefront of smart cities around the nation,” said CDOT Commissioner Gia Biagi. “The program has made Chicago a greener city and is providing clearer, more reliable nighttime lighting in every neighborhood. And the smart lighting management is making our operations more efficient, enabling our workforce to respond to outages more quickly when they occur.”

“Residents of the West Side and the 24th Ward are pleased to see that the CSLP is delivering improved nighttime visibility and safety,” said 24th Ward Alderman Michael Scott Jr. “I am proud to stand with the mayor as we cut the ribbon on a project that generated jobs and economic opportunity for residents in my ward.”

The prime contractor for the $160 million program was Ameresco Inc., a national leader in the field of energy efficiency. In designing the program, the city prioritized hiring a diverse set of subcontractors and emphasized the importance of job creation for city residents. The program set a Minority Business Enterprise (MBE) participation goal of 26 percent and a Women’s Business Enterprise (WBE) participation goal of six percent, both of which were exceeded. In addition, it included a requirement that 50% of the workforce consist of Chicago residents and 10% of workers come from socio-economically disadvantaged areas. These goals were also exceeded.

A key vendor for the program was Lyons View Manufacturing, a certified MBE based on the West Side that is dedicated to creating job opportunities for residents with barriers to employment. The company features non-discriminatory hiring practices that allow a second chance opportunity to job applicants. Lyons View assembled more than half the LED fixtures used in the program.

“The Chicago Smart Lighting Program has been a springboard for our company,” stated Josh Davis, CEO of Lyons View. “We have garnered support and investment from world-class organizations and grown into a 60,000-sq.-ft. facility in Chicago’s K-Town Business Centre. We look forward to continuing to grow our business on the West Side and taking advantage of the growing opportunities in the energy efficiency sector of the economy.”

When the program was launched in 2017, the city prioritized equity by installing the first new LED streetlights in South and West Side neighborhoods with heightened public safety concerns, allowing those communities to quickly reap the benefits of higher quality, more reliable lighting.

The program is already providing significant environmental and financial benefits, cutting energy usage and electric costs by more than half. In 2021, the city reduced its energy bill for streetlights by more than half, registering savings of $8.7 million. With energy prices on the rise, the city projects $100 million in savings over the first 10 years. In addition, the city has received almost $34 million in rebates from the utility ComEd.

The design of the new LED lights also greatly reduces light pollution into the City’s night sky as they are shielded to direct light downward onto the street and sidewalks, instead of up into the night sky as HPS fixtures do.

“We commend the city of Chicago and its leadership for completing a project that has become a blueprint for future smart lighting implementations. One of the major benefits of the Chicago Smart Lighting Program is, of course, the energy savings which then translates into cost savings, and ultimately a reduction in the city’s carbon footprint,” remarked Lou Maltezos, Executive Vice President of Ameresco. “The carbon reduction impact of this project is significant and estimated to offset more than 134,600 metric tons of carbon dioxide or the equivalent of powering 16,000 homes’ energy use for one year.”

“ComEd is proud to support the city of Chicago and local, minority-owned businesses, like Lyons View, in their efforts to reduce energy and maintenance costs across our communities,” added Gil Quiniones, CEO of ComEd. “The installation of smart street lighting provides both environmental and safety benefits for the surrounding community while lowering the city’s costs on energy use and maintenance so that those funds can be used elsewhere. We look forward to our continued work with the city of Chicago to deliver ongoing grid enhancements that will improve reliability and quality of life for the customers we are privileged to serve.”

The term “health and wellness” is used a lot in consumer marketing. Not only is it a topic of great interest, but it is also a big business with huge potential for lighting professionals.