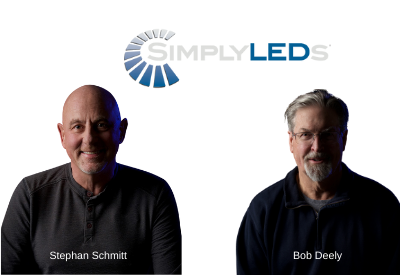 While there is a new CEO – Stephan Schmitt – at the helm of Boise, Idaho-based SimplyLEDs, he’s a familiar face. Most recently serving as President, Schmitt will now take over as CEO, succeeding founder Bob Deely, who has resumed his role as Chief Technology Officer.

The transition had been planned for a long time, according to Schmitt, who is one of the initial investors and board members of the high-performance LED lighting company targeting commercial and industrial applications.

Deely, who earned a master’s degree in Electrical Engineering at Stanford University, and fellow former Hewlett Packard engineers founded SimplyLEDs in 2010 in a garage. Early on, the company pivoted from creating LED signs to designing and manufacturing LED luminaires and retrofit kits for large interior and exterior spaces, such as warehouses, factory floors, parking garages, parking areas, roadways, and walkways. The company is now headquartered in a 25,000-sq.-ft. factory in Boise, Idaho.

Schmitt, a German expat, has worked in the technology industry for more than three decades, retiring from HP in 2020 after serving as Vice President for its Office Printing Solutions division. He joined SimplyLEDs in June 2021 as a managing partner to take over the CEO role and allow Deely to lead the company’s technology roadmap.

“We are a niche provider in the LED lighting market that has gained respect for the quality of lights and our direct manufacturer’s service that ensures those operations and installations run smoothly,” Schmitt said. “We design and manufacture all of our products in the U.S., so if our customers run into issues or need customization, they have the ability to immediately get support directly from our support engineers or the R&D team.”

“The fundamental purpose of this company is not to build lights, but to create a more welcoming and sustainable community,” Schmitt noted. “Light is welcoming. Whether you’re in a retail office, a parking garage, or a house, light – particularly when it gets dark – is one of the first things that makes you feel comfortable and welcome in the environment. It’s very important, and a great vehicle to reduce the environmental footprint that we leave behind, because LED lights are about 70 to 80 percent more efficient than the lights they replace.”

Schmitt added that SimplyLEDs focuses on industrial and commercial applications because lights used in those settings tend to draw a lot of energy.

“Some outdoor lights and warehouse lights like metal halide and high-pressure sodium lights consume 1,000 watts or more,” he stated. “If you drop that down to 30 percent or 20 percent of that, your energy savings are enormous. Sometimes you pay for the light within half a year just from the savings on your energy bill.”

“You can actually make a light much more adaptive to the environment and the people that work in the environment with the control structures you put on top of it,” Schmitt commented. “They can automatically sense occupancy. They can sense daylight coming in. They can adjust the light temperature to the time of day, so that your circadian rhythms are much more in tune with your day even though you are in an artificial environment,” he said.

“We can apply smart intelligence lights with sensors and lights that communicate with each other and regulate each other in the rhythm of how it’s occupied and how the environment around you changes. Not only can you create another level of savings, but you can also go to the next level of creating an even more comfortable and productive environment,” Schmitt remarked.

“You already have an infrastructure in place that can do much more than just power and control lights. You can collect all kinds of data and create an environment that starts to regulate and manage proactively other aspects in a building besides lighting — like security, for example. Have all the doors locked as the last person leaves the building? Do we have flooding anywhere? Is the AC functioning? Do we have a fire emerging in some area? Because we can pick up temperature and other kinds of sensor data, we can also move into grow lights and horticulture. You can pick up the nutrients and the moisture in the soil, the humidity in the air, and the plant lifecycle stage to optimize the yield in a greenhouse.”

Schmitt said that’s what he and Deely envision when they talk about SimplyLEDs transitioning from making lights and controlling lights to controlling the environment using the lighting infrastructure. “There are so many opportunities,” he noted, “which is one of the reasons I’m so excited to lead this company.”

SimplyLEDs has already achieved remarkable success during Deely’s tenure as CEO. The company received its first LED mesh networking patent in 2010 and has more than one dozen patents involving LED lights and controls. Among the notable installations of SimplyLEDs’ products are the Chrysler Building in New York City, plus a chain of Toyota dealerships in the Southwest, the 430,000 sq.-ft. Round Rock Premium Outlets shopping mall in Texas, and the Mariner’s Point Golf Center Driving Range and Course in California.

Editor Linda Longo recently sat down with the principals of the Pompeo Group to hear their perspectives on hiring in this unprecedented time of low unemployment.

Add help for diabetics to the growing list of benefits being attributed to enhancing one’s circadian rhythms by using lighting.

Tridonic hosted a “Making Light Work for Business, Buildings and People” event in London that addressed the infrastructure required to enable smart cities.

Eaton has completed its acquisition of Royal Power Solutions, a $600-million deal that bolsters Eaton’s emobility, aerospace, and electrical businesses.