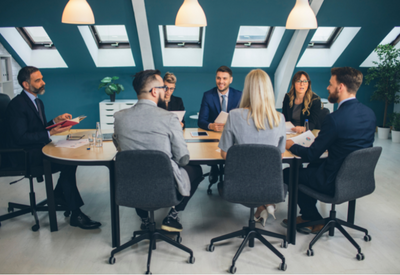 No one enjoys unsolicited advice on what your company might be doing wrong — unless you’re running a Rep Council and actually asking for that feedback. At the recent American Lighting Association (ALA) Conference, former rep-turned-consultant Bryan Shirley shared what he’s learned from running rep councils for commercial lighting clients (Cree and Hubbell/LSI, among others) and how manufacturers can duplicate those positive results for their own businesses.

First of all, what exactly is a Rep Council? Shirley describes it as “an advisory group” comprised of key management from the manufacturer plus a cross-section of reps. Shirley recommended keeping the group small, with four independent lighting agents and four executives from the manufacturer (i.e. President, CEO, VP/Sales, National Sales Manager). If the group is any larger, Shirley has found participants don’t feel as comfortable being candid.

The benefits to both parties are numerous. “It builds trust and establishes true strategic partnerships, which will lead to more sales,” Shirley stated. Like many businesses, the manufacturers’ view of how they think they conduct business can be vastly different from those who report to them. “The worst words in marketing are ‘we think,’” he remarked. “If you talk to people on the street, you won’t hear what you thought you’d hear.” And that is the point of a Rep Council. It’s a low-cost but effective way to gather market intelligence about your company that you can use to improve how you do business. “You’re getting all of this great input,” he recounted. “Normally, manufacturers don’t want to hear what they are doing wrong or how other manufacturers do things better. With a Rep Council, they are asking for that feedback. It’s all about communication.”

A Rep Council is not a sales meeting. “Think of it like a board of directors. A good Rep Council should create good will,” Shirley stated. “It should help the manufacturer and representatives set meaningful goals while also resolving complaints.” At the close, there should be agreed-upon actions by both parties as well as a commitment to follow through. 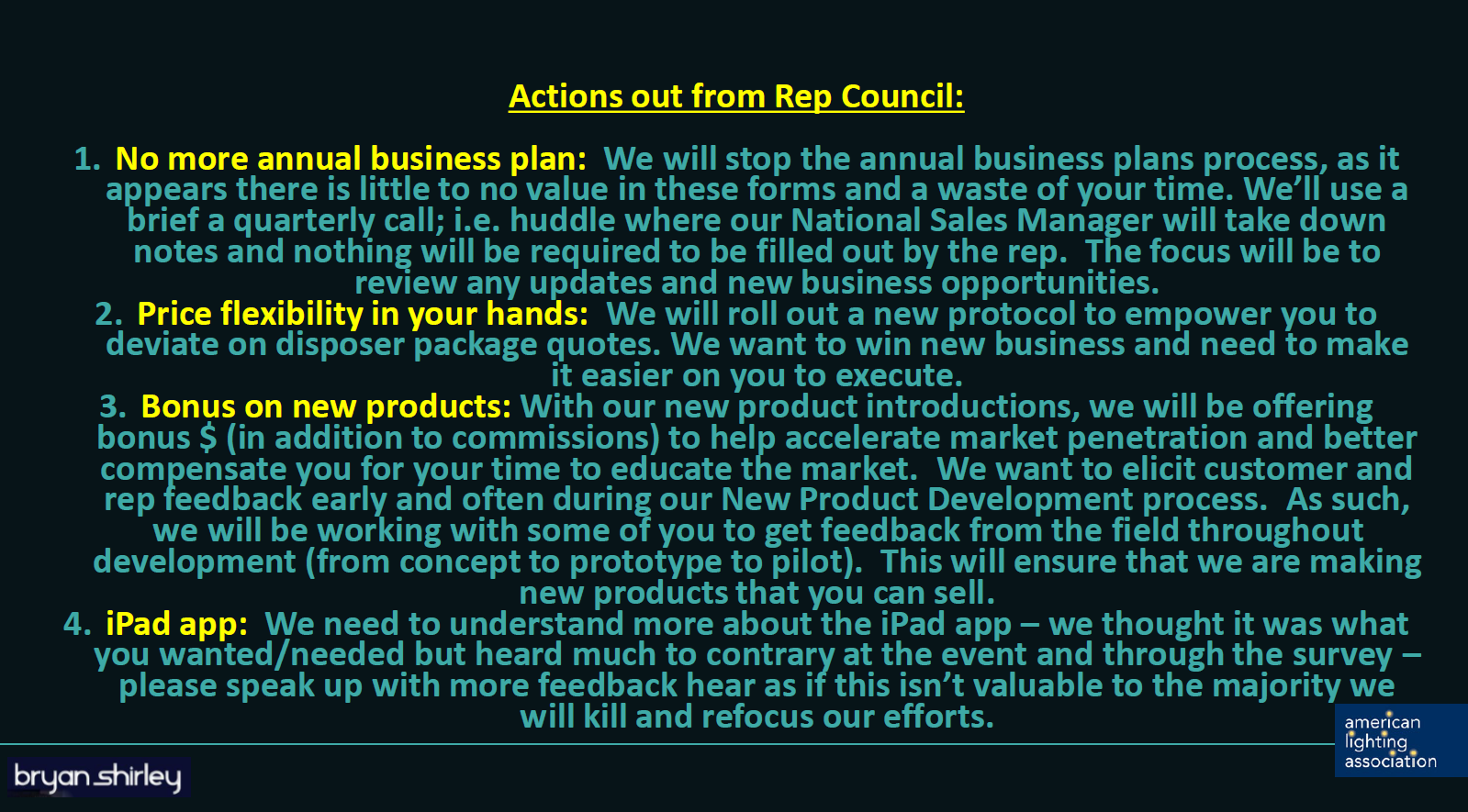 Who Should be on Your Rep Council
“Who you choose for your Rep Council is critical,” Shirley said. The easiest choice – those you know will say only positive things about your business – is not the best one. “Don’t choose your buddies,” he warned. “Look for four very different rep companies — regarding the size of their agencies and where they are located. I also suggest picking a rep who is relatively new to the line. Why? Because it’s a fresh set of eyes. The rest are used to doing things a certain way. You want to hear a different perspective.” According to Shirley, an ideal Rep Council is comprised of: someone from your largest market, your fastest-growing market, someone who has a long history repping the company, and someone rather new.

Each of the four reps is tasked with calling three other rep firms (who rep the line) and ask if they can fill out a simple, anonymous 7-question survey. If everyone responds, this will yield 16 opinions. Designate one of your four reps to serve as the “chair,” who will organize the rep outreach and compile the surveys, working with the manufacturer’s VP/Sales in weeding out the outliers and finding “threads” of commonality.

The survey questions are:

Here is an example of what that email outreach letter from Rep Council members to other reps could look like: 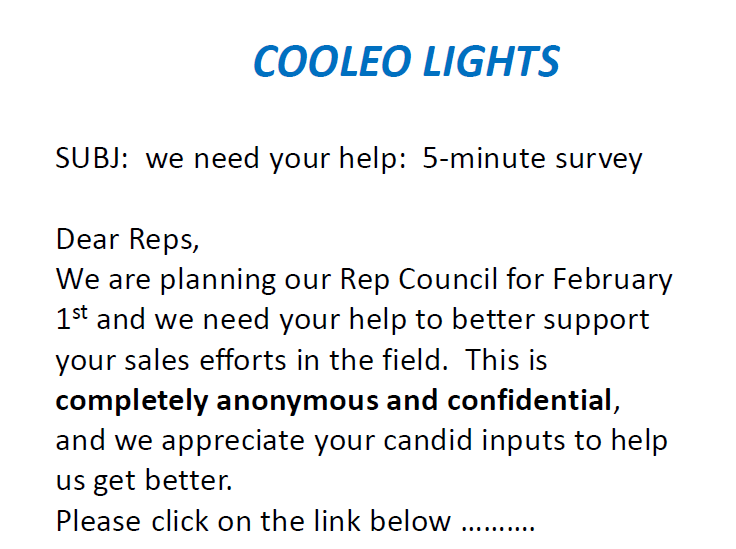 In the past, all Rep Councils were conducted in person, and that is frankly the way Shirley prefers. However, in this post-pandemic world where we have all gotten accustomed to virtual meetings, he has expanded this view to include virtual method.

Both methods require a two-day commitment. For the in-person meeting, Shirley advised a two-day maximum (with a one night hotel stay) near the headquarters. The reason he prefers the Rep Council meeting be held away from the office is to avoid any additional distractions. “Include a fun evening event like going to a ball game or out to dinner,” he said. All expenses are paid by the manufacturer, and Shirley estimated the overall cost to be around $6,000.

The alternative is a Virtual Council of Reps (VCR) would be a cost-saving alternative, but the downside is that lack of face-to-face camaraderie. If you opt for the virtual method (Zoom/Microsoft Meetings/Google Meet), Shirley advised breaking the meeting sessions down to 3 hours one day and 2 hours the next day. Of course, the same list of “rules” about confidentiality and encouragement of candor are provided. In both cases, an Action list is drawn up as well as a final review. In lieu of the fun night out or fancy dinner, Shirley suggested sending each virtual Rep Council member a token of appreciation for their participation.

Having a Rep Council is only worth it if the manufacturer acts on the feedback. “Unfortunately, a lot of times, a company will have a Rep Council, do some strategic planning, and then that plan becomes credenza-ware. It just sits on a desk untouched,” Shirley said. The point is to act on the actions suggested by the Rep Council.

Similarly, Shirley has seen Rep Councils where the reps failed to communicate back out to the field to those who responded to the survey to share the findings and the Action agenda as promised.

Example of an email the Rep Council members can send to those who participated in the survey: 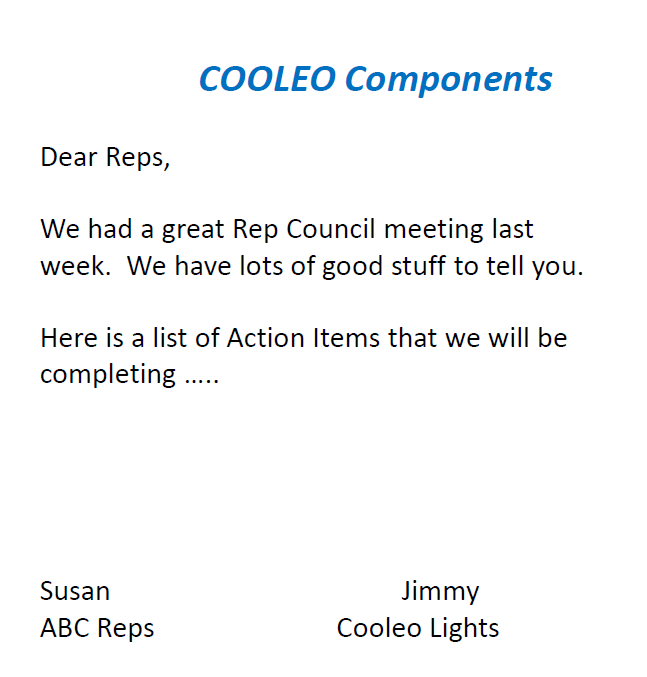 “If I were a manufacturer, I’d make a Rep Council an annual event, and have it be face to face,” he remarked. “I’d then hold quarterly Rep Council meetings virtually, which could be as simple as a 30- to 60-minute follow up of the action that has been taken.”

Shirley said the results of a Rep Council are well worth the effort. “It elevates your business and allows your company to improve,” he noted.

The Light and Health Research Center (LHRC) at the Icahn School of Medicine at Mount Sinai have announced that UL Solutions, a leader in applied safety science, has funded a two-year membership in the LHRC’s Lighting Education Partnership.

GE Current has completed the renovation of its educational facility in North Carolina and is ready to host visitors and students.

LEDucation 2023 is looking for lighting experts with insights and unique technologies to share as speakers at next year’s event.