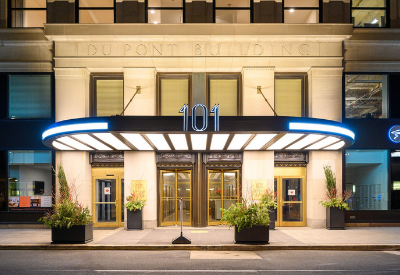 The landmark DuPont Building in Wilmington, Delaware was one of the first high-rise buildings in that city when it was built in 1908 as the headquarters for corporate giant DuPont. In 1913, a portion of the 950,000-sq.-ft. mixed-use building was transformed into the legendary Hotel Du Pont. The building’s new owners, The Buccini/Pollin Group, are thrilled to continue enhancing this lasting legacy by renovating the property – from ground floor to the 13th floor – so it once again becomes the heart of life in Wilmington.

Luminosity Lighting Associates, The Smart Lighting Company, and EOS worked together to create an impressive entryway that would underscore its reputation for luxury. While EOS provided the LED panels that illuminate the overhang, The Smart Lighting Company orchestrated the dramatic entryway effect at the Hotel Du Pont by using several different high-powered architectural lighting fixtures. Specifically, HB50B12 was aimed above the overhang with louvers utilizing 8°x40° beam optics, HB40HP fixtures were used to shine and illuminate under the overhang with 15° optics, and SB8 fixtures specified with 120° optics were attached at the wall inside the overhang to illuminate the building’s awning. The result has magical appeal and reinstates the vivaciousness of this iconic landmark.

The lighting in a hospital’s operating room is complicated. There’s the brightness needed to perform surgery, but also the benefit of green lighting that helps reduce eyestrain and improves visual acuity when reading  medical monitors.

The new Q Topanga apartment complex in the San Fernando Valley features decorative lighting solutions that underscore the luxuriousness of the community. 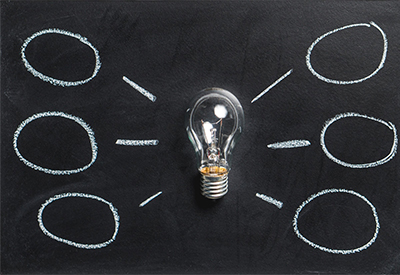 After more than a decade as a beloved community gathering spot, the James Bar in Missoula, Montana recently received an interior refresh that included a warm wash of light from LEDI.